Roger Robert's book tells the story of the CAF, with the men who made it famous (including founder lloyd Nolen), its units (including the French Wing),  detailing the units' histories and aircraft as well as their most famous members such as James Doolittle, George Bush Sr, "Chuck" Yeager, Paul Tibbets, "Pappy" Boyington, Alan Shepard, James Steward, and more.

You can order this book by using PayPal or credit card using the button below, or by check with this order form. 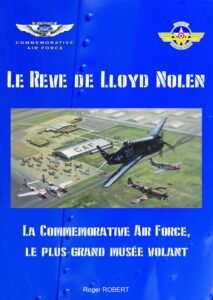