Restoration of the CAF French Wing Piper Cub, help bring "The Little Blue Cloud" back into the sky

The goal of the CAF is to acquire, restore and maintain aircraft from the World War II to Vietnam War period in flying condition, and to engage younger generations to honor the pilots and crew members who fought.

Its objectives are: Educate, Inspire and Honor.

Since 1996, the French Wing is the French unit of the Commemorative Air Force. The statutes have been filed in France and the FW is in the form of an Association loi 1901. It maintains a Piper J3 in flying condition and is based in its hangar at Le Plessis Belleville where its volunteers organize an annual fly-in that brings together old planes, old vehicles and guests in period costumes.The French Wing conducts historical research and produces a documentary entitled "History and Duty to Remember" which publishes interviews with veterans that are primarily intended for a young audience and can be viewed on its YouTube channel and website. 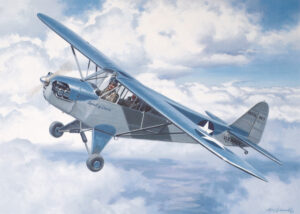 The association acquired the Piper J3 F-GHLQ in 2003. The restoration of the aircraft was done in 1993.

The aircraft was named "Spirit of Lewis" in honor of Lewis Bateman, an English member of the French Wing who died in 2000. Lewis had been an unwavering supporter at the start of the association. A former mechanic on the Fairey Firefly during the Korean War, he had become a brilliant aeronautical engineer at the origin of the Airbus family.

Shortly after his acquisition, a contest for the most beautiful design was launched and Roy Grinnell, ace painter and member of the FW, won with an NE-1 version of the Cub. It is this version which was retained and in these colors that the plane will be painted.

The aircraft will represent NE-1 serial 26359 (NE-1 being the designation of the Piper J3 Cub for the US Navy, which served in the USA and in the Pacific theater

Here is his history reconstructed from its "History card" for the FW by an amateur historian, John Scott: 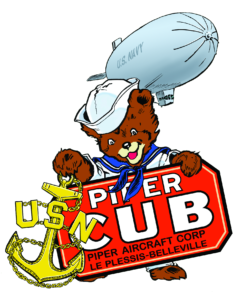 Roy Grinnell's painting features NE-1 serial #26359, in the paint scheme he wore between December 1942 and June 1943 while assigned to the ZP-32 Squadron at Moffett field in San Francisco Bay.

The ZP-32 operated airships from this base for maritime patrol, ship escort and anti-submarine warfare missions.

Herb Parsons, President of the Moffett Field Historical Society Museum (MFHS), received a gift from the family of a sailor who served in the ZP-32, a photo album containing a few photos of the NE1 captioned, "The little Blue Cloud".

The choice of this paint scheme twenty years after the contest won by Roy is a double tribute, to Roy now deceased of course and to the fighters.

At the end of 2021, the year of the 25th anniversary of the French Wing, the plane was transported by our members to Libourne at Aero Services Restoration for its restoration.

The plane will be dismantled, dismantled, inspected, the parts that need to be changed will be changed, the fuselage will be sandblasted, painted, then re-stained and painted.

The estimate amounts to a little more than 30000€ that the French Wing has saved over the years and is therefore this much more than the cost of the plane.

What are our goals for this fundraising campaign?

Thank you for your help in getting The Little Blue Cloud back in the air !