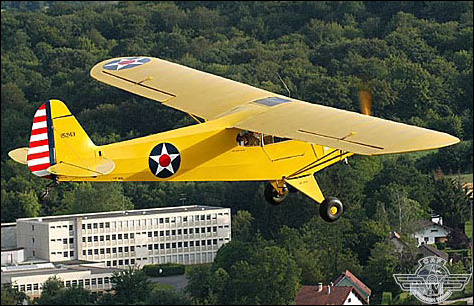 Week-end after week-end, groups of members came in turn to pet me like a little animal deserves it, til July 2, when was put up the final stroke of paint. The day after, on July 3, I took off for my first air show, a Fly-In in Montbéliard. Let us re open the news-letter of this time : 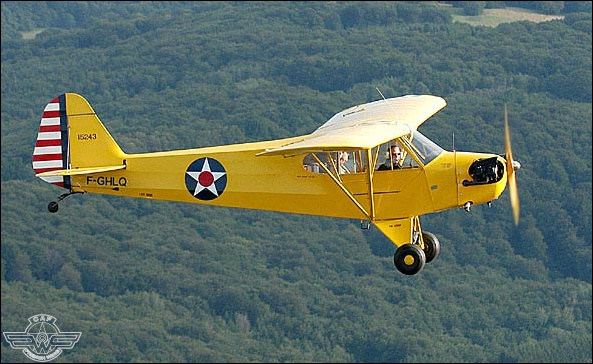 TAKING ADVANTAGE OF ITS PARTICIPATION IN THE FLY-IN ORGANIZED BY COLONEL JEAN-CLAUDE MINIGGIO, THE SPIRIT OF LEWIS INAUGURATED ITS NEW LIVERY AND FLEW THE DISTANCE BETWEEN PERSAN-BEAUMONT AND MONTBÉLIARD WITH NO PARTICULAR PROBLEM.

THIS 7 HOURS LONG ROUND-TRIP, TO WHICH MUST BE ADDED THE FLIGHTS FLOWN LOCALLY, REVEALED THAT EVEN AN AIRCRAFT OF SUCH A MODEST SIZE REQUIRES THE BEST POSSIBLE ORGANIZATION.

The offer we were made of participating in the Montbéliard Fly-In, located in the East of France, by colonel Jean-Claude Miniggio, President of the Association "The Old Propellers of the Area of Montbéliard", was a real challenge for the CAF French Wing, and an experience of an invaluable benefit for the future trips of our Warbird.

Although the few weeks available before this event seemed too short to prepare the Spirit of Lewis, we heartily accepted this invitation and did everything possible to get the plane to the same standard as the other aircraft that would be there.

We doubled the speed and the painting of our airplane in USAAF colors was completed the day before it left for Montbéliard !…

With its new livery, and a brand new radio and navigation equipment, our valiant little Cub took to the air from the runway of Persan-Beaumont, in the morning of Saturday, third of July, with colonel Gilles Avenel at the controls, and his passenger, colonel Fumiko Delfino. 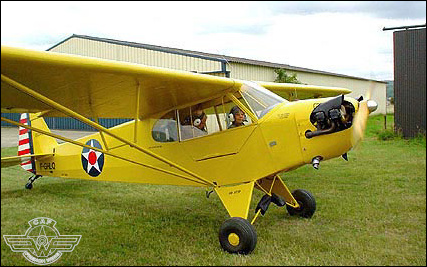 The two hours range, plus the indispensable thirty minutes safety margin, seemed very short, and forced our friends to stop twice for gas, and also for the "natural draining" of the occupants.

Many clouds were pushed by a strong westerly wind. The help they were given by this wind noticeably shortened the flight time and three hours and five minutes were enough to cover the distance of this first, historical raid.

On the road, our friends cols. Roger Gouzon and Bernard Delfino were kept informed about the flight by numerous phone calls made by Gilles and Fumiko. They had to admit it : Despite its relative slow speed, the courageous little Cub was going much faster than their car.

As a precaution, Roger and Bernard had taken along a twenty litres drum of aviation gasoline, an excellent initiative that would soon reveal itself as very useful.

The Spirit of Lewis stopped the first time at Sézanne, its previous base, where we hopped to meet its former owner, Jean Nicole, who would have seen it again with great pleasure.

Unfortunately, he was absent on this day. The plane was refuelled, and our friends took off to reach Langres where another fuel stop was possible. 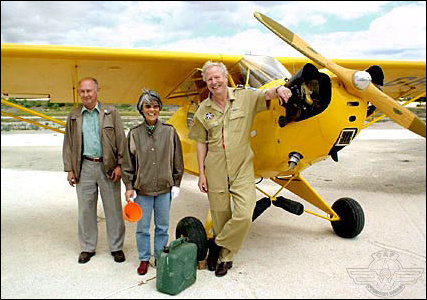 When they got there, they realized that there was not a soul on the airfield, and various phone calls remained fruitless. Gilles and Fumiko's last hope was to call their "escort" who had just stopped for lunch in a restaurant near Troyes.

Roger and Bernard forgot their lunch, quickly bought four sandwiches, and got back on the road to reach Langres, a drive of about one sixty miles.

Driving was not easy on this day which marked the first day of the Summer holidays, and it took them ninety minutes to get to Langres airfield.

The refuelling of our plane was done the "old way", with a drum and a funnel, and the four sandwiches were highly appreciated by the hungry participants !

The crew got back on board the Piper Cub, Bernard spinned the propeller, and the two vehicles started off again towards Montbéliard that the Spirit of Lewis reached an hour later, while Roger and Bernard took another hour and a half.

THE STAY AT MONTBÉLIARD

The arrival at Montbéliard was one of the best moments of this long day. We had the great pleasure to be reunited with colonel Jean-Claude Miniggio, the organizer of this Fly-In (Below, on the left, with our new friend Francis Pelletier on the right), and also colonel Philippe Duflot and his wife Danièle, colonel John Francis and his wife Cécile, and finally Gilles and Fumiko, who were already rested of their flight. 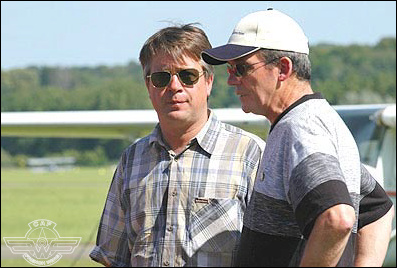 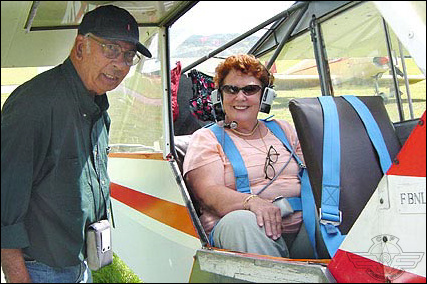 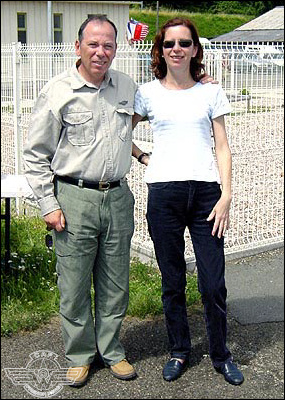 Other friends were there too, like Eric Janssonne, and many others who we met during various previous airshows. Numerous planes had already arrived, and the week-end was looking good.

Jean-Claude immediately took great care of us. He drove us to the excellent hotel he had chosen for our short stay, so that we could check in and have a quick wash, then we went back to the airport where serious matters were about to start.