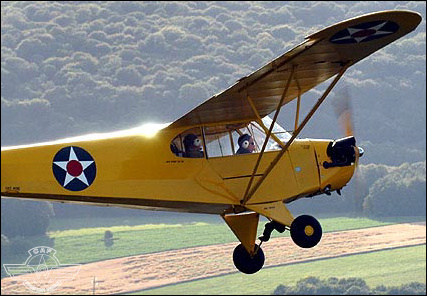 Knowing that we needed to get some pictures of our Piper Cub in its natural element, Jean-Claude immediately organized a formation flight.

After a grouped take-off, the two planes flew to an isolated area where they flew large circles so that Bernard could collect as many pictures as possible. Half an hour later, the two airplanes landed on the grass runway of Montbéliard, mission accomplished, with, as a premium, four friends very happy of their flight.

One must say that our aircraft has a specific photogenic look which draws everyone's attention, either in the air or on the ground. This is why a news reporter of the local newspaper chose our plane as the subject of the article that was published the following day. Bernard took this opportunity to tell her everything about the Commemorative Air Force and its French Wing, which materialized in this article, very well written for a person who knew very little about aviation.

Jean-Claude flew a couple more flights, including one with his magnificent Morane-Saulnier 315, currently the most beautiful aircraft of this type in our country .

The spectators watched the arrival of other airplanes, some of which flew from Switzerland, like these beautiful and colorful Bücker Jungman's (Below), three other Piper Cub's, a Stampe, an NC 856A, and many others. The planes were finally parked for the night, and the day was concluded by an excellent meal that was taken in the meeting room of the Montbéliard aero-Club, served by volunteers whom we thank very much for their good care and hard work.

AIRBORNE ON THE FOURTH OF JULY 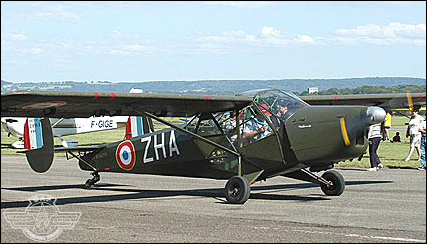 A good night sleep and a copious breakfast allowed everyone to get some strength and be ready for a day made of flights and friendship. At 10 in the morning, we were back at the airfield of Montbéliard-Courcelles. Some had already flown and enjoyed the beautiful weather that the meteo had not expected… Gilles, who, regretfully, had to go back to Paris on the 13:00 train, managed to fly our Piper Cub twice, with John and Philippe as happy passengers. The Spirit of Lewis flew in loose formation with the NC 856A (Above), a strange looking aircraft with undeniable flying abilities. On board was a professional movie maker who filmed numerous sequences of our airplane which played his role as a movie Star quite easily.

Our group set up a simplified PX which, despite its reduced size, drew some unexpected customers who spent a few dozen Euros which will help our plane's budget.

The lunch and the volunteers who served it, were of the same quality as the previous day barbecue, which gave every guest plenty of energy for the flights to come in the afternoon, under a very bright sun shine. 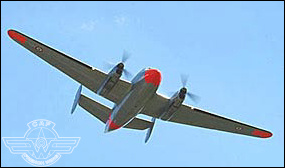 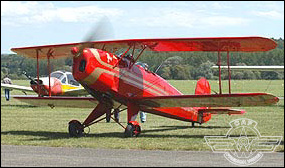 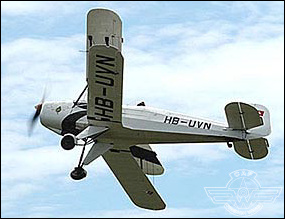 The Dassault 315 Flamand took off and greeted us with a few spectacular passes that all our friends highly appreciated. The Bücker's flew non-stop, and one of them gave us a smooth aerobatics display which revealed the ability of this aircraft and the pleasure that its pilot had to demonstrate these qualities.

Jean-Claude took this opportunity to do some aerobatics with the bright red Bücker. He was delighted and grateful for this unusual flight. In exchange, he took up the owners of this Bücker in his Morane-Saulnier 315.

As he came back from the second flight, Jean-Claude signalled Bernard to jump on board his Morane, a surprize invitation that our Unit Leader immediately accepted (Those who know Bernard's passion for the planes of the immediate pre-war period will understand the pleasure and the emotion he felt when he climbed on board this highly historical aircraft !). Here's what he says about this flight… 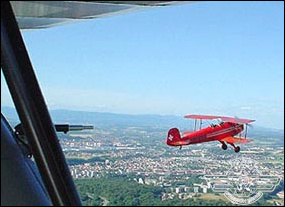 "With my heart beating at high pace, I climbed on board the MS 315 and sat in the front seat. I instantly got the same very strong feelings I had experienced during my first flight in this plane, during last year's airshow of Haguenau. Cherry on the cake, this flight's purpose was to fly alongside two Bücker's who were returning to Switzerland before the night.

The formation was quickly set, and several minutes of formation flying allowed everyone to take pictures of the planes. Since this type of mission is really my favourite, Jean-Claude was giving me a chance to raise my happiness to limits I rarely met before !

These sensations were greatly amplified by the open-cockpit which efficiently helps to go back in time to the far remote thirties, when this type of plane was the Master of the French skies. 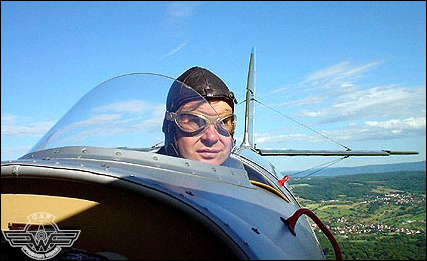 I had not taken my main camera, in order to fully appreciate this flight, but I was still able to take a few shots using the small size digital camera I always carry in my pocket. This is how I was able to take a portrait of Jean-Claude flying his Morane (Below). A First I believe ?…

These too short moments spent in this Morane 315 will stay, for me, one of the greatest moments of this week-end. A big Thank You Jean-Claude ! Your kindness and your friendship allowed me to feel strong emotions that will stay in my memory and my heart for ever."

The day was such a success that none of the participants noticed the speed at which time was flying away, and far too soon, came the time to say good-bye.

Philippe and Danièle were the first to leave for Paris, then John and Cécile for Lentilly. Bernard and Fumiko were the last ones to leave our hosts and get back to Paris in the middle of the night, so that they would be ready to greet Patrick and Roger who were about to fly from Montbéliard to Persan the day after.