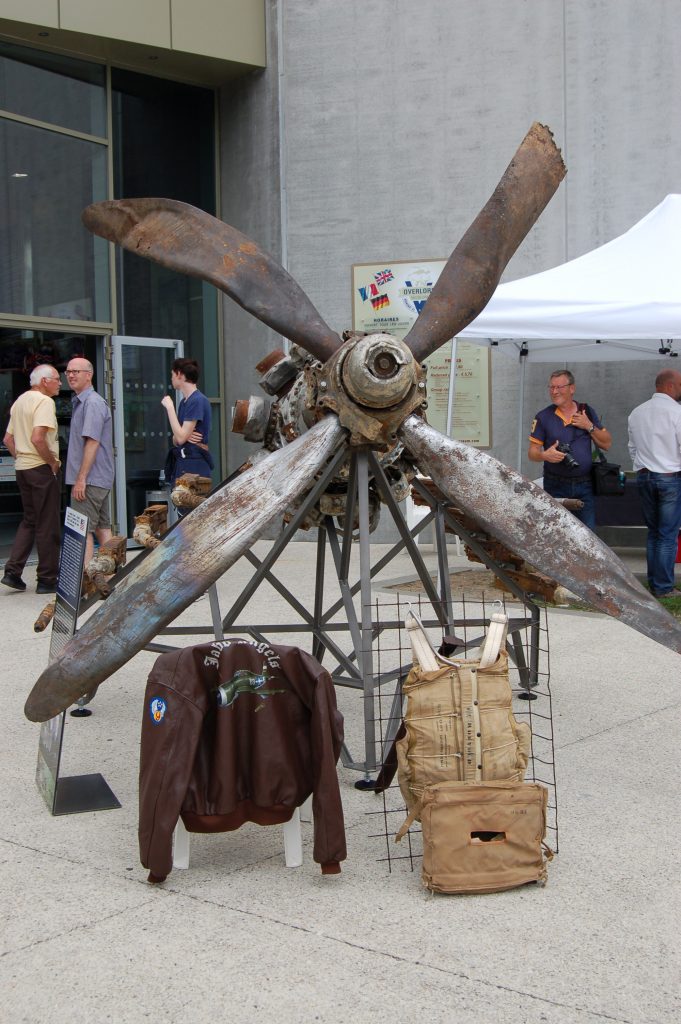 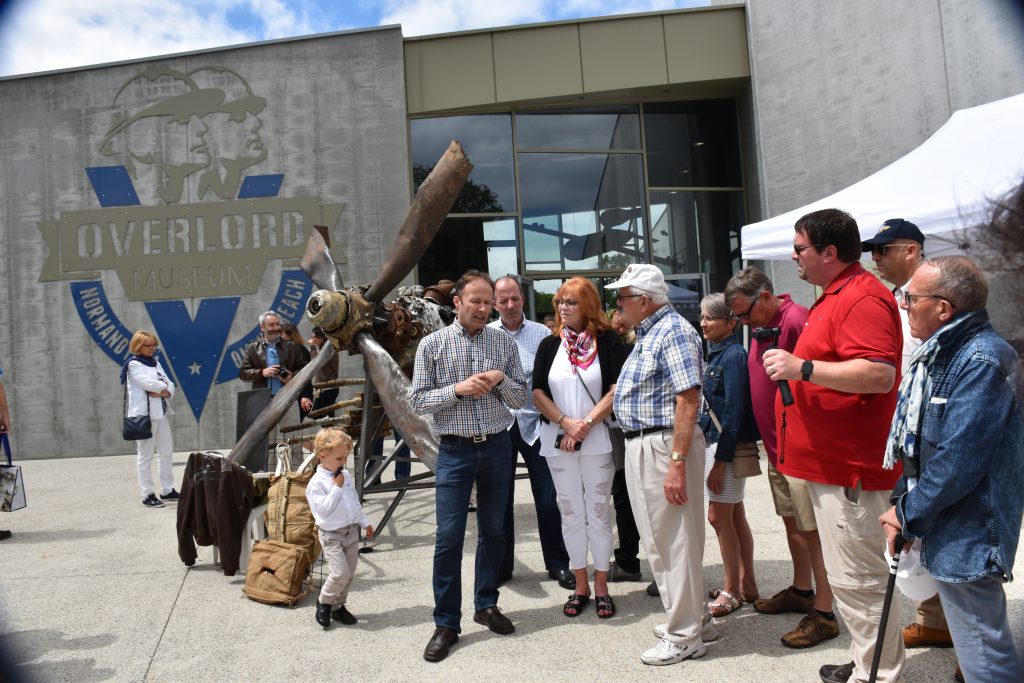 The CAF French Wing and the Overlor Museum of Colleville sur Mer, represented by its director Nicolas Leloup, had the great honour of welcoming the family of pilot Marvin Jerome Rosvold. 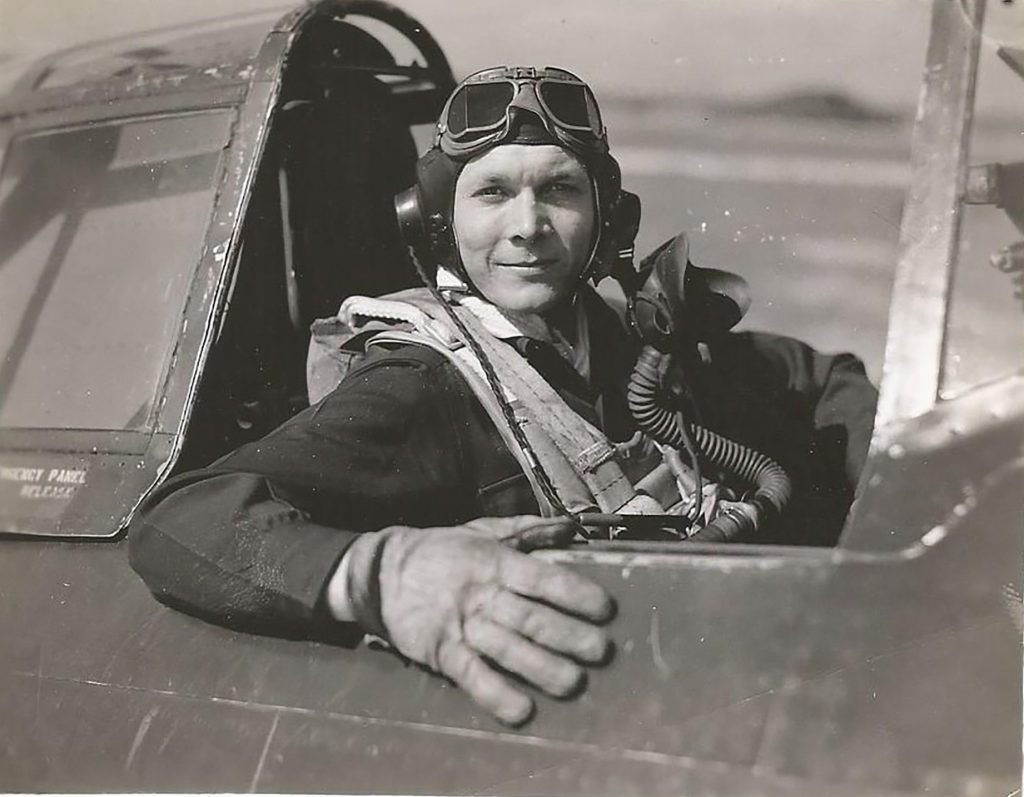 On 17 August 1944, returning from a mission in the putanges sector, Marvin J. Rosvold of the 397th Fighter Squadron, 368th Fighter Group, 9th Air Force, was shot down, his P-47’s engine hit by flak.

He bailed out near Falaise and landed behind Allied lines. He returned to his unit the following day. In 1992, Michel Rainfroy, a history and aviation enthusiast, found the crash site south of Falaise and excavated the engine and eight machine guns with the help of Michel Leloup, owner of the Falaise Museum. At the time, they did not know the identity of the pilot of this P-47. In 2011, Stéphane Duchemin, Wing Leader of the Commemorative Air Force’s French Wing, discovered and restored 1Lt Rosvold’s parachute and reconstituted his entire story except for location of the crash site. Michel Rainfroy and Stéphane Duchemin met in 2016 and pooled their researches, thus confirming that the P-47 discovered by Michel Rainfroy was that of Marv Rosvold.

His brother Harlan, also a World War 2 veteran who served as a US Marine Corps corporal in the Pacific (Tinian, Saipan and iwo Jima), his daughter Suzan and five members of the Rosvold family were able to discover the remains of his aircraft and parachute and follow his past footsteps at the location.

It was during the Bastille Day, France’s national holiday, that the meeting was scheduled in Vierville for a lunch with a view on the seafront. After lunch, they were surprised with the arrival of their chauffeur for the afternoon, Michel Meslin, who was to drive them around in a 1942 Dodge WC51, raking them back to the atmosphere of 1944.

They were expected at the Overlod Museum in Colleville, where they were greeted by a large crowd surrounding the town’s mayor and Nicolas Leloup who made a moving speech. The family discovered with great emotion the remains of the P-47’s engine as well as Marv Rosvold’s parachute. Nicolas Leloup had had a special mount built especially for the event in order to present the engine and machine guns as well as an information panel in both French and English.

The welcoming staff of the Overlord Museum then invited the participants to a toast to friendship and Harlan Rosvold gracefully accepted to sign books, photos and profiles of his brother’s P-47 created by the gifted artist Gaëtan Marie.

The Rosvold family then boarded the Dodge again to drive to the neighboring American cemetery in Colleville and pay their respects.

The afternoon was concluded with a Dodge drive along Omaha beach.

Mireille Bajum then welcomed the party of 15 people to a dinner in her mansion, “Le Domaine de Bayeux” which was followed by the screening of a presentation made by Stéphane Duchemin, retracing the operations of the 368th Fighter Group in Normandy and the details of the 65th mission of Lieutenant Rosvold, which ended in his bailing out of his aircraft.

On the morning of the 15th of July, the Rosvold family regrouped at Cardonville, where the former ALG A-3 was located and which was the home base for Marv and the 368th FG during the summer of 1944. The mayor, Mrs Chantal Faudemer, had prepared a warm welcome for them with flying American flags and a reception in the small town hall where photos of Cardonville during the war were exposed as well as a movie of wartime US archival footage prepared by the local association of municipalities. She accompanied the group to the Cardonville castle, which was used during the war as headquarters and officer’s club by the 368th FG. It is nowadays a farm belonging to the Mattmann family, whose daughter kindly welcomed the family and gave them a tour of the area.

Madame Faudemer had planned an event with local officials around the memorial monument dedicated to the men of the 368th FG and those of the 816th Engineer Aviation Battalion who built the airfield. The monument was decorated with flowers and Madam Mayor favored applauses over the more traditional moment of silence to celebrate these men. A convoy of military vehicles and reenactors drove by the monument.

The group took to the road again and reached the Falaise sector where the mayor of Saint pierre du Bû was expecting them for refreshments. They were joined there by Michel Rainfroy, who had discovered the wreckage of the aircraft. On the way to the field in which Marv’s aircraft fell, a quick stop was made at the emplacement of the german Flak battery that probably shot Marv down. Then the owner of the field gave the family permission to access the premises. Armed with his metal detector, Michel Rainfroy made a first unsuccessful scan. Nicolas Leloup had taken with him photos of the 1992 excavation of the engine and machine guns. A final check was made with these and made it possible to narrow the location. Stéphane Duchemin and Michel Rainfroy made a final sweep and Stéphane finally made the detector sound. The first pieces of fuselage that were found were offered to Suzan. Her husband Thomas dug more and found additional parts. Sue left with a few parts of her father’s aircraft and some earth of the crash location.

The following stop was made where Marv had landed in his parachute and were a local woman had found his parachute one morning. Sue, Nicolas Leloup, Mathieu Bianchi and Stéphane Duchemin met her son who now lives in the house and happens to be a great enthusiast of aviation and warbirds. 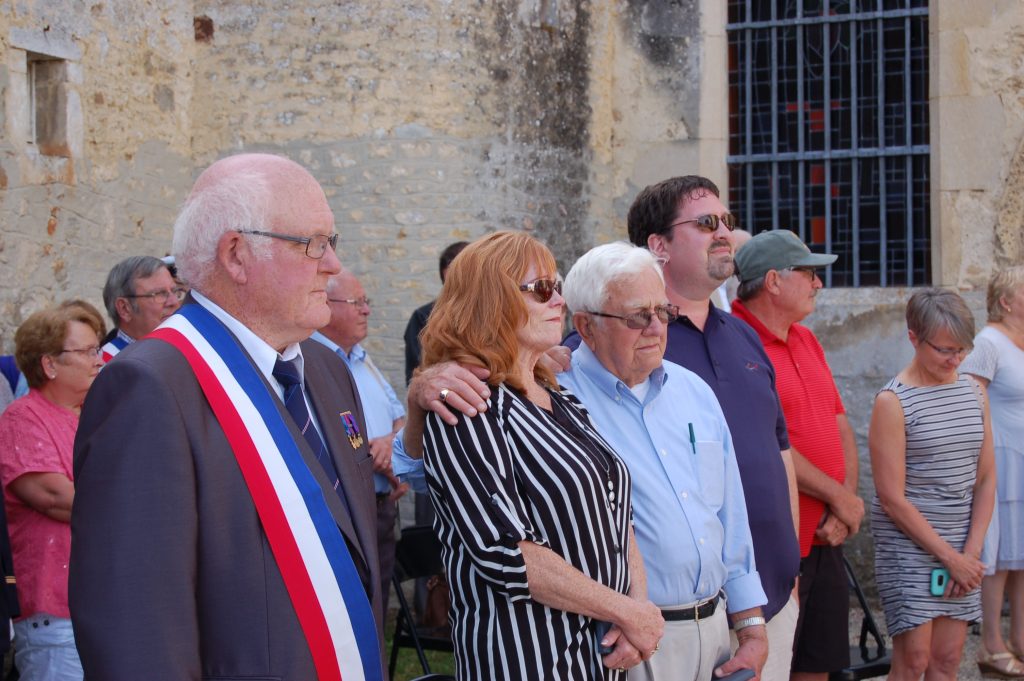 At 4:30 PM, the mayor of Saint Pierre du Bû had invited the Rosvold family to a ceremony at the village’s monument to fallen soldiers. A large public was there to greet them. Youths from the village raised the American, French and European flags. Musicians from the local music school accompanied the raising of the colours. An honor guard of 25 standard-bearers from several Veteran associations was present, under the orders of the mayor, a former Colonel of the French Air Force. The mayor gave a speech that was simultaneously translated by an interpreter for the benefit of the Americans. A wreath was set down by the Rosvold family and the mayor after which the hymn for the deceased was played and a minute of silence was observed. The American, European and French anthems were played. Mr Leroux, mayor of Saint Pierre du Bû, then offered Sue and Harlan the city’s medal of honor. They were both moved and touched by this gesture of respect and gratitude by the French people towards the combatants who sacrificed everything for their freedom.

The mayor then invited the assembly to follow him to the village hall for a toast of honor. The standard-bearers assembled into a row of honor to greet the guests. The members of the Rosvold family saluted them and thanked each of them individually. The hall’s tables had been decorated with a table runner with the colours of the two countries. Michel Rainfroy had set up an exhibit of aircraft parts, photos and documents covering his years of research on aircraft fallen in the region and mainly P-47s. The mayor explained to the assembly how the mystery surrounding Rosvold’s 65th mission was solved and then invited Michel Rainfroy, Nicolas Leloup and Stéphane Duchemin to speak. The inhabitants got a chance to exchange with the Rosvold family and ask questions to those who had uncovered his operation story in Normandy. 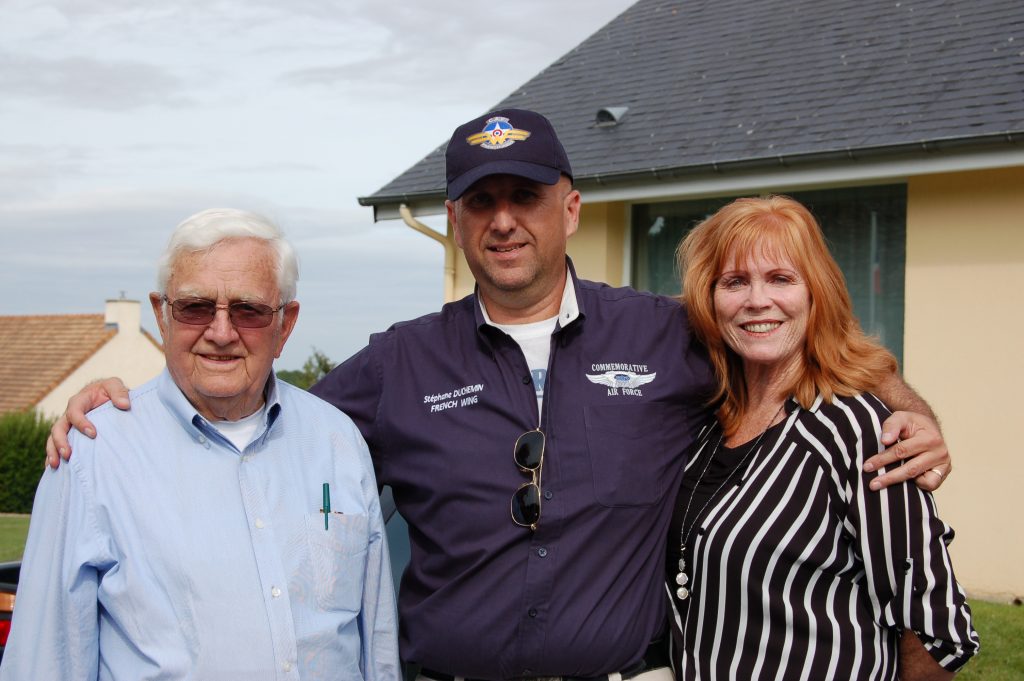 On behalf of the CAF French Wing, Stéphane Duchemin would like to thank the Rosvold family for coming to France to honor Marv’s memory, Nicolas Leloup and the Overlord Museum for organizing and financing this operation, the museum staff for their welcome, mayor of Colleville Patrick Thomines, François Mathy, Michel Leslin, owner of the magnificent Dodge WC51, Bertrand Brown for his profiles of Marv’s P-47, Mathieu Bianchi, Patrick Pierre-Pierre and the “locals” John Rouxel, Kevin Rouxel and Jérôme Delile, all members of the CAF French Wing, for their support, Mireille Bajum of the Domaine de Bayeux for her welcom, Michel Rainfroy, who discovered the wreckage, for his research, comments and exposition, Chantal Faudemer, mayor of Cardonville, his family and the elected officials of Cardonville and Osmanville, the Mattmann family, owner of the castle, Jean-Claude Leroux, mayor of Saint Pierre du Bû and his constituents and volunteers, for their exceptional welcome.

For watching the pictures of those two days, it's here

Video made by Mr Léveillé, owner of the fiel where Lt Rosvold's P-47 crashed