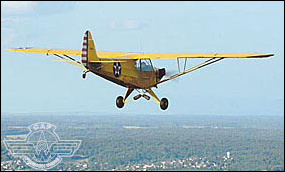 Patrick was definitely the Wing member who surprized us most during this week-end : Because of his professional occupations, he was unable to be in Montbéliard on Saturday July 3. Nevertheless, he still decided to travel across France, by train, on the following day, from La Rochelle to Montbéliard. He arrived there at 10:30 PM, just in time to get a night rest, and jumped in the Spirit of Lewis to ferry it from Montbéliard to Persan the next day.

We thank him very sincerely for his team spirit and his generosity, which honor our Wing and the entire Commemorative Air Force. Patrick tells us about his flight here below…

"Arrived in Montbéliard, thanks to the railway company SNCF, I was welcomed by Jean-Claude Miniggio, a Colonel who is always there when required (Thank you Jean-Claude for patiently waiting for me under the mosquitoes attacks !…).

After a good night, we picked up Roger at his hotel, and went to the airport.

As a good professional, the tower agent printed a meteo map for the whole trip - Thank you Madam for your kindness - The forecast are CAVOK over Luxeuil, with, here and there, some CB hidden in the mass of clouds. The map shows a fair amount of clouds along the entire route.

The wind is head-on and up to 25 knots on runway 26, it rains, and the horizon is blocked in the direction of our departure route. I'm pessimistic about our possibilities to take-off before noon.

Suddenly, a miracle ! The weather opens up and the menacing clouds disappear towards the East. I decide to leave. 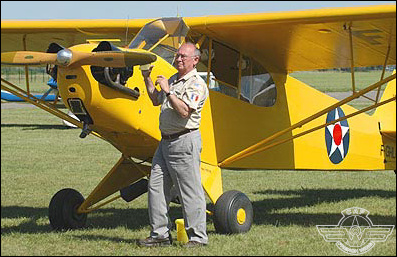 The J-3 is in the parajumpers' hangar. I had not seen it since April 25. It is magnificent in its new warrior colors. Bravo to the whole team !

Pre-flight check done, all is well. After a briefing, the crew take their seats, Roger at the front, and me behind, and we do the usual check list before starting the engine. Chocks in position, ignition off, the prop is spinned by the club's mechanic, three injections, contact ! At the first blade the engine starts. I let it warm up until the temperature pointer is in the green sector. The wind has calmed down, but I taxi carefully. After the last checks at the runway holding point, we take-off from the concrete runway 26.

Gilles had told me that the average fuel consumption was 18 litres (I had expected 15). In addition, the head wind makes our ground speed go down to 50 knots (92 km/h), therefore, I decide to do a first technical stop in Vesoul. After flying through the R 45 D zone, with the agreement of Luxeuil Approach, Vesoul shows up straight ahead.

Vertical fly-by and I get into the circuit where there is no other airplane. Power reduced, carburetor heating on, final approach, and then… §?&$#%§ !… the engine stops after touch-down ! Since we needed some exercise, eight hundred meters pushing the plane does the job !

First refueling and a new meteo, thanks to the Instructor of the Vesoul aero-club who delayed an aerobatics lesson with a CAP 10 to print the met map from the Internet (Thanks to him and to the secretary !) . Apparently, the wind has calmed down. 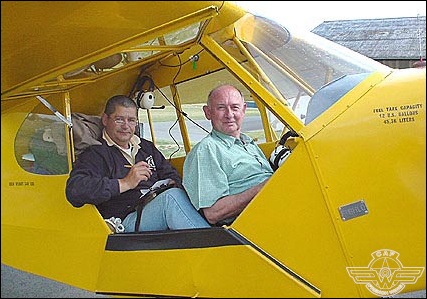 Roger sits in the plane, I put the chocks on, turn a few prop blades backwards, put a little bit of throttle, and spin the propeller. The engine starts at the fifth attempt. I remove the chocks, Roger holds the stick backwards and he keeps his feet on the brakes while I get in my seat. Another take-off, and good-bye Vesoul. The next stop is Troyes.

The navigation is very quiet (One must say that at the speed we fly, we have time to watch the scenery and the cars on the highway. They overtake us easily !).

The headwind of about 10 to 15 knots slows us down. The fuel gauge rod is pessimistic, and, therefore, I am too. I don't think I can land in Troyes with a sufficient safety margin, in case this airfield has to close before we arrive there, forcing me to land somewhere else. I decide to change our route and to land in Juvancourt.

I know, by reading the supplement to the local air maps that zone R 5 B1 is inactive in July and August, but I try over the radio to get in touch with them. No one replies, it's normal ! It's a holiday period for those who use this area four days per month the rest of the year to test radio-controlled pilotless aircraft, in other words, drones.

Reconnaissance of the airfield, choice of a QFU, circuit, then, landing.

Since we diverted, I don't have the airfield map and its precious information like the phone numbers which would allow me to call the appropriate person to get some gasoline. Fortunately, the people in charge of the Juvancourt airfield aero-club displayed these phone numbers on the door of the club house. I call the President who tells me that a pilot should come to the airfield very shortly to do a flight, and he will sell me some gas.

A few moments later, the pilot arrives and helps us with the refueling.

President Brisson calls me back to check that everything is going fine. Thanks to him and the pilot whose name I can't remember. Good-bye Juvancourt where we may come back for a future airshow ?… Next, Coulommiers, which is in our range.

Unbelievable ! We reach the speed of 65 knots. Exciting !… In Coulommiers, on the self-information frequency, I can hear that the runway in use is the 27. I decide to go for the grass runway 27 R and I taxi to the fuel station. The airport, run by Aéroport de Paris, is very large and it takes us some time to reach the fuel pump, and, of course, it's not the right one !

An ADP agent I meet turns down my proposal to pay the landing fee straight away. What a nice man ! But it's only to hear that he has a meeting and cannot deal with us : "Don't worry, the landing fee will be sent to you in Persan". Of course I'm not worried at all.

More exercise to push the plane to the right pump, but this time over 50 meters only. The club sells us the gasoline, and we can even have a drink at the bar.

Another take-off to reach Le Plessis-Belleville. The regulations limit our altitude to 1500 feet.

We fly at the height of 1200. We can see two airliners which are on final for Roissy CDG about 1000 feet higher than us. It's normal, their lowest allowed height is 1500 feet in this area.

We carry on and fly between the Paris TMA and the Creil zone which is active, and here is Persan. We land on runway 28 after a total of 4 hours and 4 legs, which required a total of 73 litres of gasoline, and an average of 18,3 litres.

Colonels Fumiko and Bernard Delfino welcome us with friendly signs and indicate that we should taxi to the fuel station where we fill up the tank.

We then start washing the plane. With the four of us, it's quite quick, and we remove the hundreds of mosquitoes and other bugs which are stuck to the wing leading edge, the struts, the engine cowling, and the wind shield.

To conclude this day, Roger invites us for a delicious diner at the "Gardens of Spring” chinese restaurant in Tremblay, followed by a well-deserved good night sleep.

I learned a lot during this trip, and I loved flying it."

The participation of our Wing and our airplane first seemed very difficult.

But the solidarity and the efforts of several members who did not hesitate to work hard and travel, all together, more than 6000 miles, changed this jump in the unknown into a sum of experience and new knowledge which will be very useful for the future.