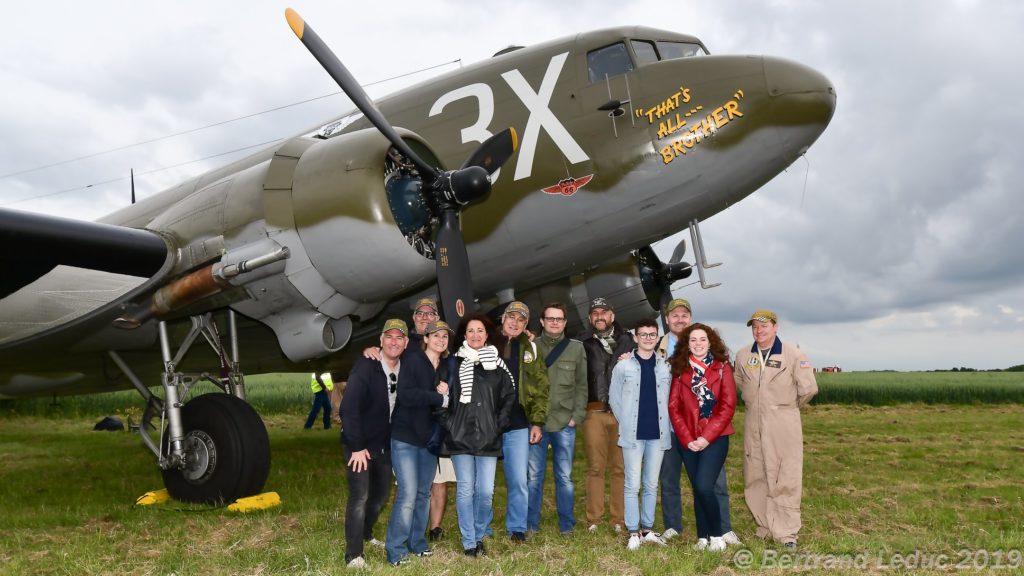 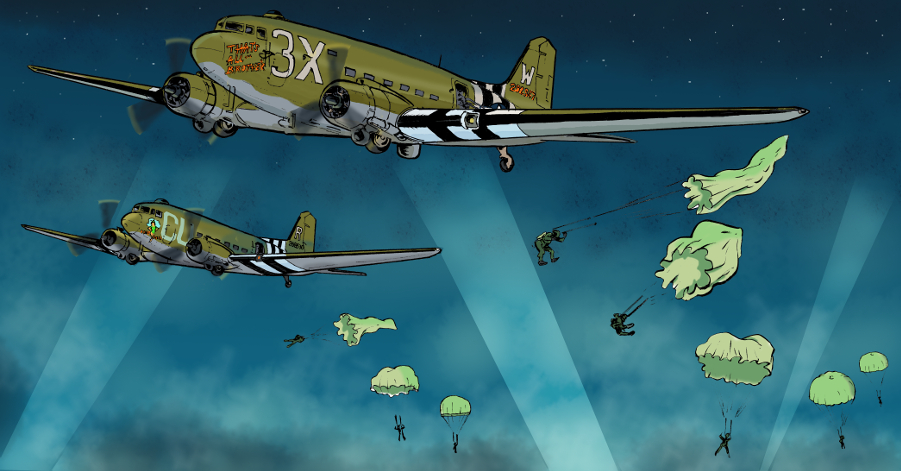 Because of COVID-19, most ceremonies for the 76th anniversary of the Normandy landings have either been cancelled or largely downsized. Let's take a trip back in time to the 75th anniversary, which was exceptional and memorable for the CAF and the French Wing.

First of all, the 75th anniversary was somewhat the conclusion of the support our Wing had brought to the C-47 “That's All Brother” restoration project, relaying and contributing to all fundraising campaigns for the past four years with our friend David O'Connor. Two CAF aircraft and D-Day veterans, the C-47 Skytrain “That's All Brother” and the C-53 Skytrooper “D-Day Doll”, joined the 15 Dakotas of the D-Day Squadron to cross the Atlantic from the US to Europe by the northern route. In May 2019, the aircraft successfully made the flight in small groups travelling a few days apart and made it to the United-Kingdom where they were stationed until early June. Their stay there ended with the Duxford airshow.

On June 5, 2019, That's All Brother crossed the Channel twice. In 1944, it was the same aircraft which, following the Pathfinders, led the first assault wave in Normandy . Seventy-five years later, it was leading the DC-3 that dropped parachutists on Sanerville. Members of the French Wing were present for their arrival at the Caen-Carpiquet airport. The landing and parking of the 23 aircraft was a memorable moment for our group.

On June 6, the D-Day landing anniversary, all roads were blocked around the commemorative sites and part of our group went to the Arromanches beach to witness the vehicle gathering organized by the D-Day Landing Museum and its director Frédéric Sommier, a friend of the French Wing. Several hundred vehicles were present, most of them British, in a very British atmosphere with the smell of eggs and fried bacon. 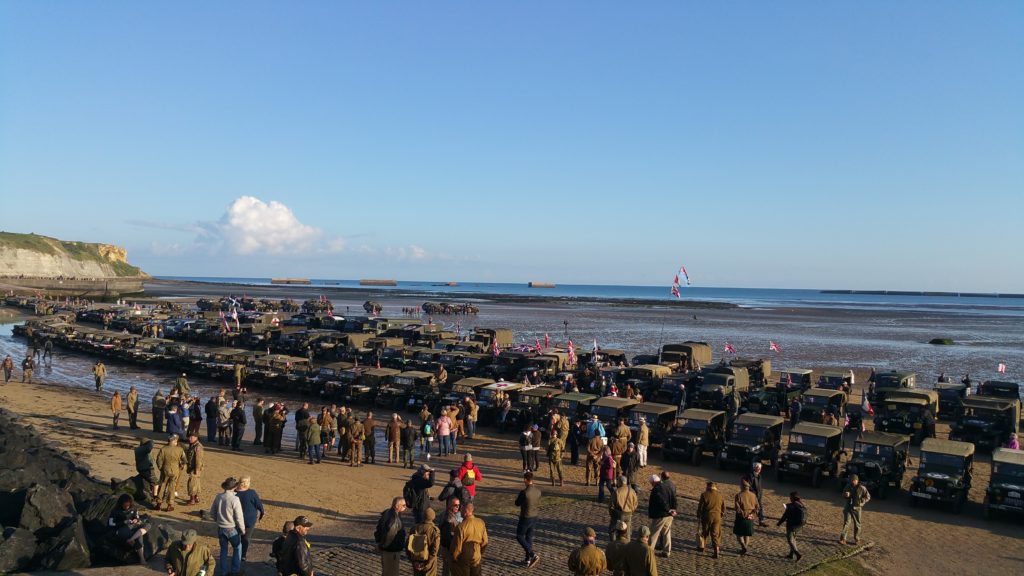 That same day, DC-3s overflew the American cemetery in Colleville during the commemorations with presidents Trump and Macron, and then overflew Arromanches and our Wing members before heading back to Carpiquet.

On June 7 and 8, the organization Daks over Normandy opened the Caen-Carpiquet airport to the public for a two-day airshow. Stormy weather on the 7th got the best of our tent and made any flying nearly impossible. On the 8th, our group was pleasantly surprised by an invitation from That's All Brother's crew to fly over the beaches and the Coleville cemetery. This was one of the highlights of the 75th anniversary for all of us. 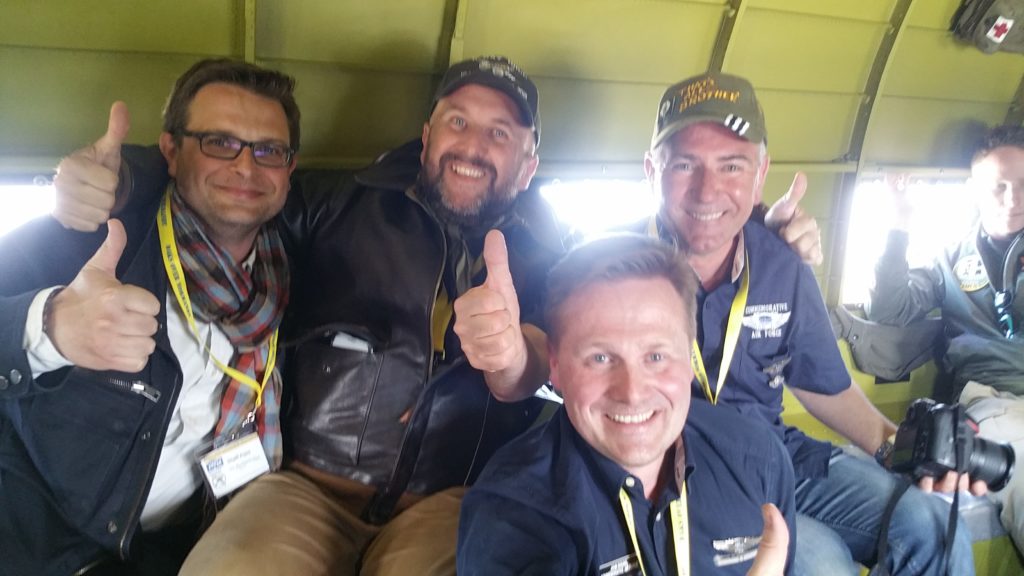 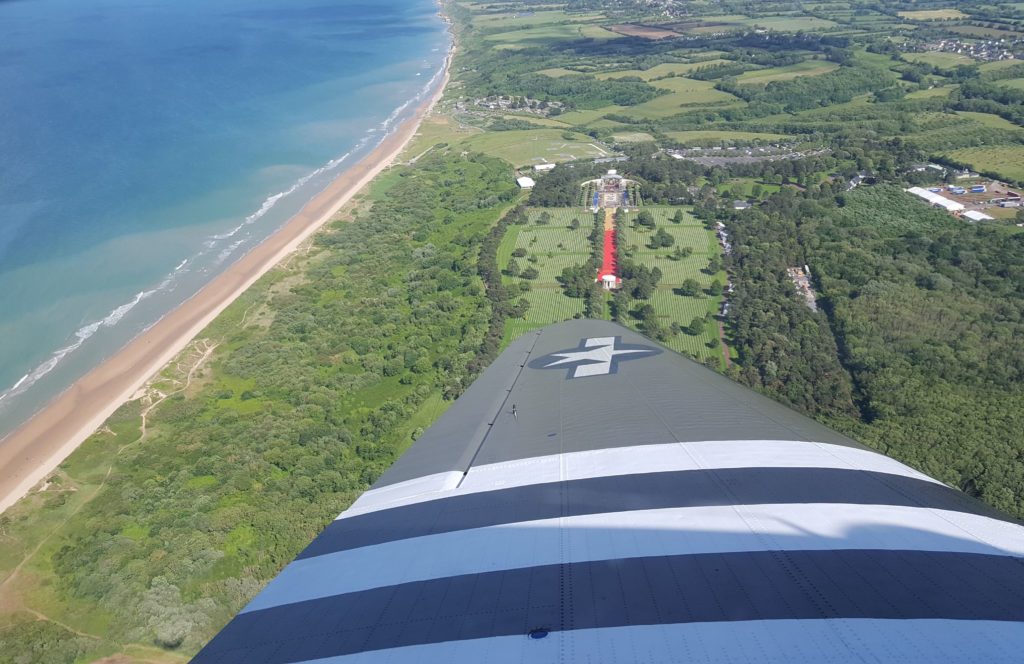 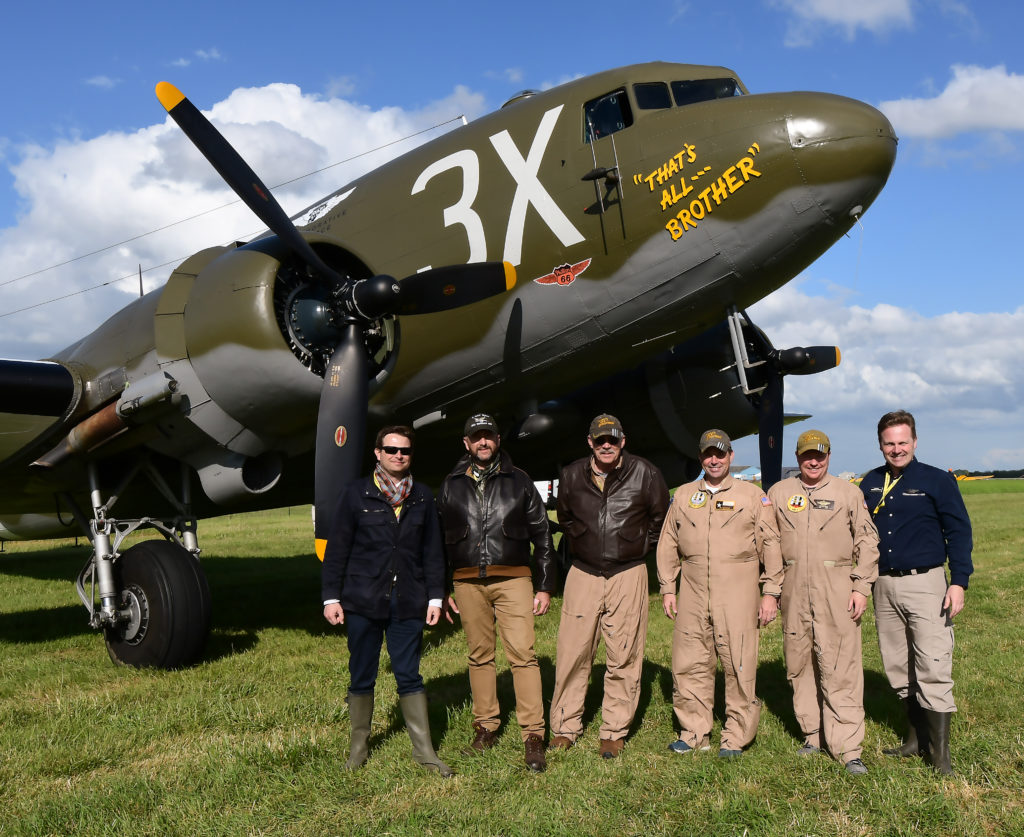 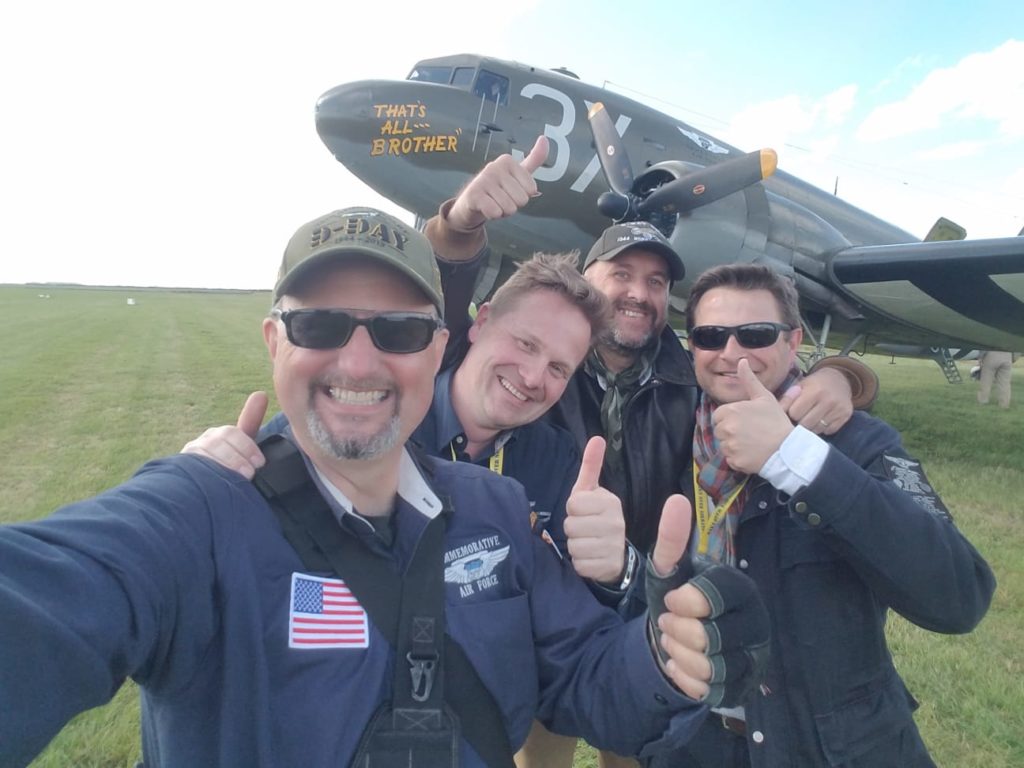 The following day, the DC-3 flew off to Germany to celebrate the 70th anniversary of the Berlin Airlift but this was not the end of the French Wing's adventures with the CAF's crews and aircraft.

Part of the group remained in Normandie to welcome the family of Marvin Rosvold, a P-47 pilot who was shot down in August 1944. Wing Leader Stéphane Duchemin, with the help of a local historian, had researched Rosvold's story and retraced his journey. A few family members had already made the trip in 2017, including his daughter Suzan Cunningham and his brother Harlan, following his footsteps in Normandy. In 2019, some twenty Rosvold family members made the trip and rented a bus from Paris to Normandy to attend the inauguration of a new wing of the Overlord Museum in Colleville, owned by FW member Nicolas Leloup. Nicolas has devoted a substantial share of the museum to airpower during the Battle of Normandy, as well as a permanent exposition dedicated to Lieutenant Rosvold. His brother Harlan, who also served in World War II in the Pacific with the US Marine Corps, and his daughter Sue were once again present and greatly moved when they discovered the various objects that had once belonged to Marv and had been recovered. 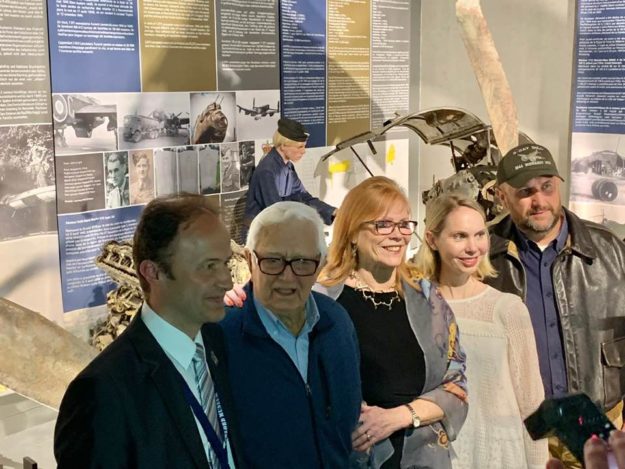 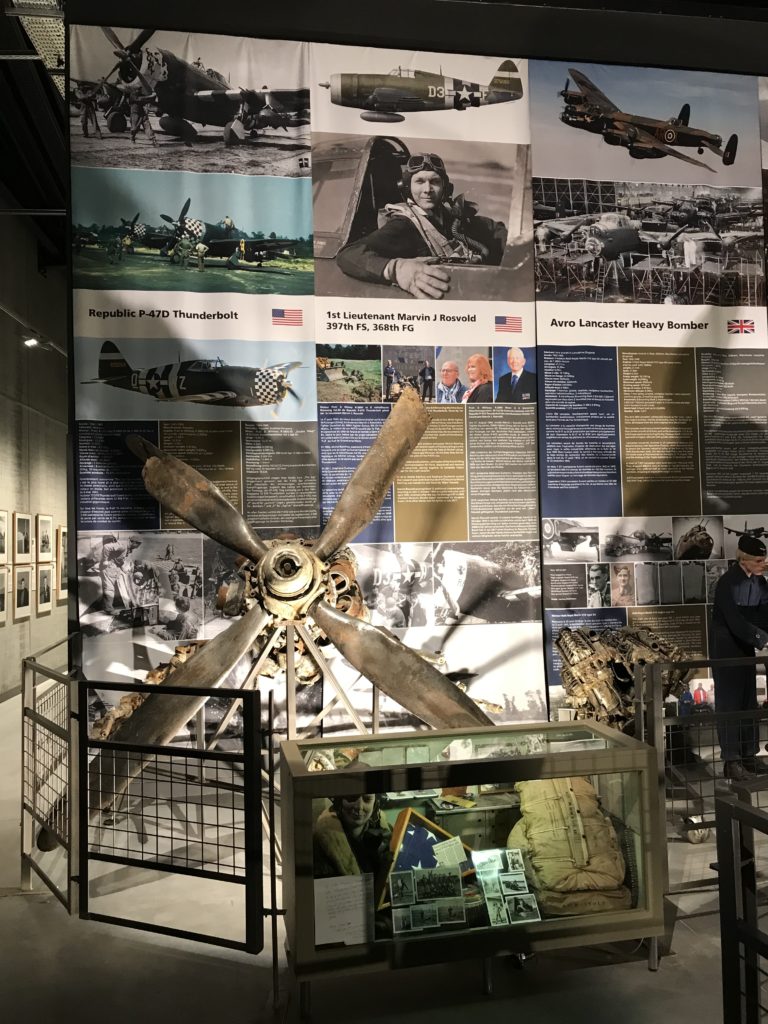 A few weeks prior to their arrival in Europe the CAF D-Day Wing, which regroups the crews of both CAF aircraft, C-47 “That's All Brother” and C-53 “D-Day Doll”, asked the French Wing if they make arrangements for their participation in the Le Bourget International airshow. Our Wing Leader was up to the challenge and with the collaboration of the Flight Display bureau and its director Christian Mégret, set everything in place for the event. Each aircraft had to be available for display in the air and then on the ground, and our members spared nothing to move the aircraft back and forth from the static exhibition area to the flight ramp, organize onboard tours, man the tent and sell goodies for the FW and our CAF guests. The aircraft returned to the US the following day. More than 316,000 visitors attended the 2019 edition, and we're hoping this will inspire CAF Headquarters to send a new aircraft for the CAF European Airpower History Tour... We're currently working on it. 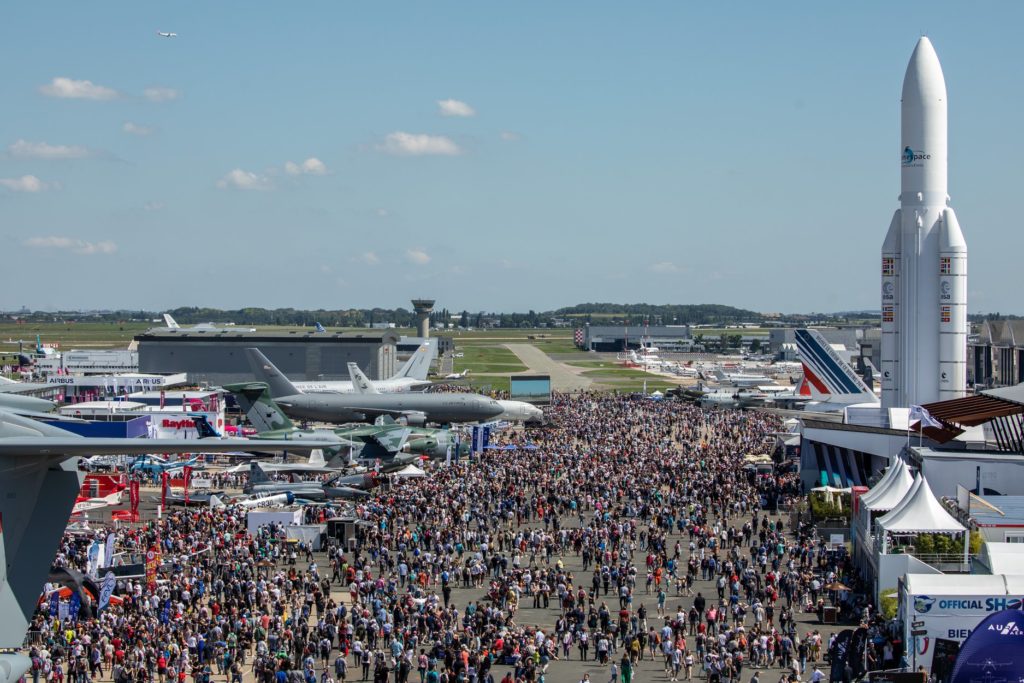 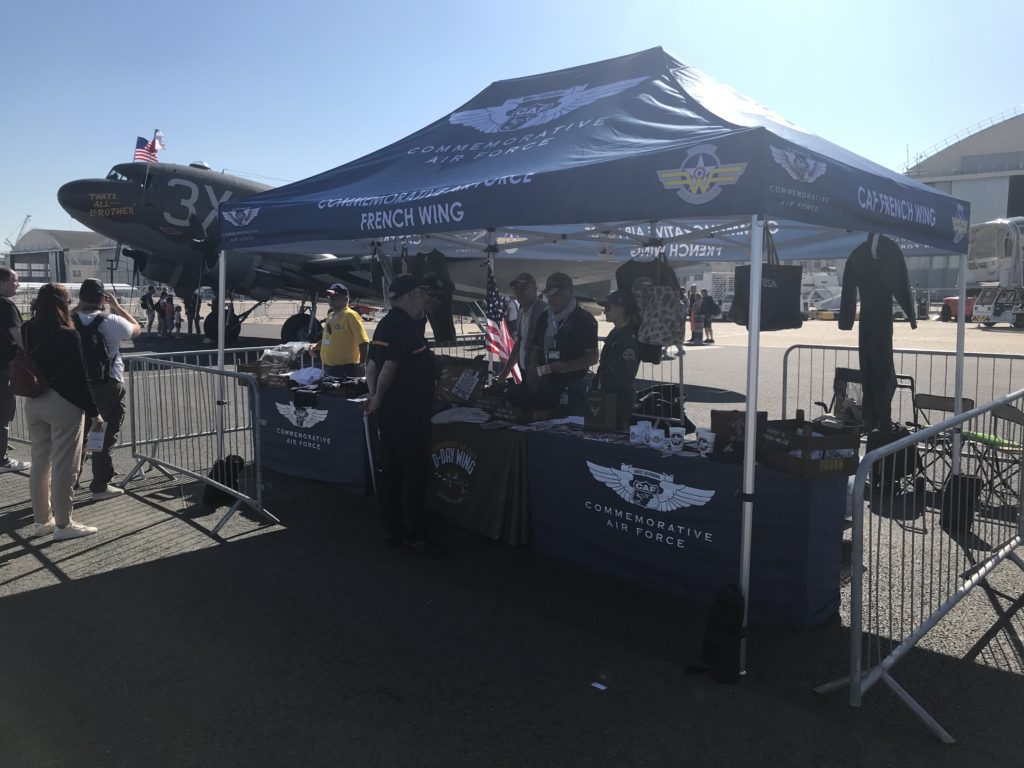 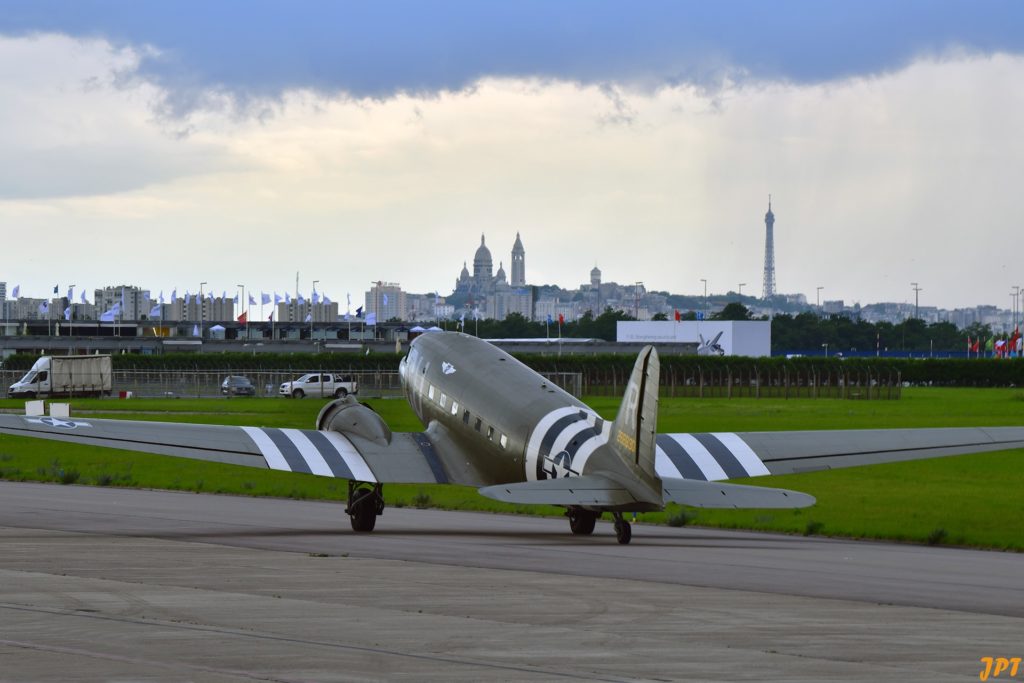